It wasn’t a great movie. In fact, it had almost been forgotten until George Clooney and his friends produced a remake in 2001. 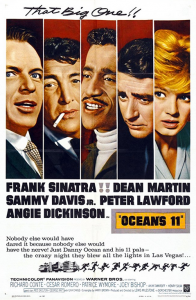 It was Ocean’s 11, starring Frank Sinatra, Angie Dickenson, Dean Martin, Sammy Davis, Jr. and a number of other famous Hollywood stars. The premise was pretty simple: a group of ex-military friends would rob five Las Vegas casinos on a single night. It was an exercise in logistics, primarily. And although there was some technological hurdles to jump, it was by and large a mechanical operation.

So, what motivates the cybercriminal?

You know—that shady, unknown character (or entity) lurking in the shadows waiting to take advantage of a lack of security he, she or they hope you do not have. What motivates them?

Chances are they probably don’t have the looks of Sinatra or Dickenson, or the suave of Martin or Davis. But it probably doesn’t surprise you they have many of the same motivations.

At the Carolinas Net Care Spring Technology Briefing, my colleague Greg Aker shared some of what motivates a cybercriminal to attack your system. Turns out, the Ocean’s 11 crew wasn’t far off.

The bottom line is it all relates to cash. Everything becomes a marketable quantity in the digital marketplace. Carolinas Net Care continues to monitor all threats. Sometimes, it’s just good to know what you’re up against.